By 1994, Dr. Marra was conducting workshops for The Conference Board in New York City and ‘personnel’ was becoming known now as ‘Human Resources (HR)’ although few knew exactly what that meant as it seemed that except for a change in name, most of the same stuff was being done.   He recalls that in one of his seminars which was filled with Vice President of Human Resources and others of equivalent stature he made the statement that in his opinion, ‘the only group that senior management including the CEO knew less about than their organisation’s customers were their organisations employees’. He gained total agreement from the delegates!

Also in 1994, Dr. Marra had the opportunity to talk with the total Human Resource Staff of Allstate Insurance in Chicago, Illinois. They, at the time were one of the larger insurers in America at the time. During the session, one of the Vice President of Human Resources at Allstate Insurance asked, ‘Dr. Marra, in your opinion, what is that employees really want?’ In a matter of minutes the answer was given as follows:

There was a recent YouTube presentation based on work by Bob Proctor, HR Guru, just a year ago (2015) that simply reinforced what Dr. Marra had said more than 21 years before.  And no, the story has not changed despite a lot of other things changing.  We are talking about “foundations” here – the cake so to speak and not the frosting on the cake – a future “Simple Truths” Blog will get into more “frosting” issues.

You can explore the two items above in a little more detail to be sure. When you do, there is a realisation that the following MUST also occur to even come close to declaring “success”.  What are they? They would all I suppose fit under the banner of “support” as follows:

In 1995, so we have heard, the great and first revolution in HR started. However in the ensuing years while many HR professionals lost their jobs, organisations went to centralised management of this and other ‘common’ business unit or divisional functions or even worse, outsourced them little progress toward even the faintest concept of an employee centric organisation emerged. In fact, if anything, the situation seemed to regress instead of progress. You, the HR Professional reading this can be the judge.

During the 1994-1995 time period, Dr. Marra participated in the one and only one cultural change process in his 43 year experience in 39 countries around the globe which was actually driven from the ‘people side’. The change effort was called, ‘People Make the Difference’ and it was the idea of Electrolux Corporation based in Stockholm, Sweden. It was powerful and unique almost to this very day in 2016.

In 1996, Heskett et al from Harvard, wrote their first book called, The Service-Profit Chain’ which had an extraordinary amount of research such as with Sears, the large American retailer, that starting with employees  – making your organisation the employer of choice and improving employee satisfaction led directly to your organisation becoming the supplier of choice and increases in customer satisfaction and then, unbelievably, they made the giant leap to financial results showing that profitability per business unit, division, retail location increased significantly as employee satisfaction – their attitudes, motivation and behaviours increased. Proof positive at last and a book which remains timeless and should be required reading for every senior executive (by the way there is a shorter journal article in the HBR for those with shorter attention span such as senior management!). 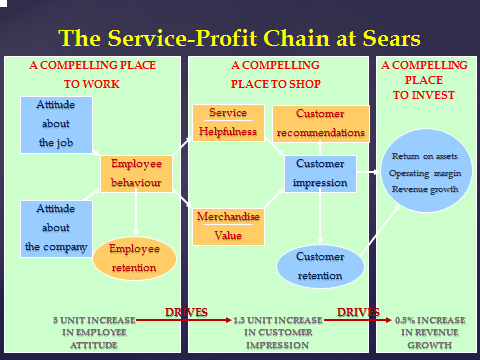 In 1996 also, Dave Ulrich, the Oracle of the HR world, wrote his book, ‘HR Champions’ in an effort to boost the HR movement and Professionals – to try shift some management paradigms.  Read part 4 here.