Unfortunately, little in the way of advancements were made in the field of ‘Personnel’ until almost 1980.  It was in 1982 that Peters and Waterman introduced their book, ‘In Search of Excellence’ in which they highlighted a few better (or what at that time represented ‘best’) practises by what seems to be a nominal number of organisations with a slightly more enlightened view on the importance of people. One of the few approaches, as you may recall was ‘MBWA’ or management by walking around – a practise, believe it or not, which is still not embraced by a majority of organisations! Management instead remains aloof.

So what exactly was management by walking around and why did it represent such a break with tradition? Well, as you probably know, up until that time, members of the Management Committee – the Leadership Team remained in their ivory towers away from the day-to-day operations of the business concerned supposedly with more strategic issues – although research surveys time and again over the years show that senior management spends less that 5% of their time on matters of a strategic nature. They simply didn’t have time to ‘mix’ with the average employee or they did not see it as their role – being aloof was keeping with their role – or they were just plain afraid at what they would find if they exposed themselves to regular employees and possibly be asked a question which they couldn’t answer. 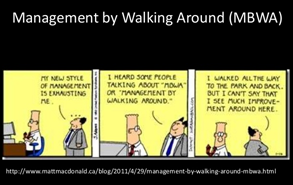 Up to this time, the workforce knew senior management either through seeing their pictures occasionally in the newspaper or internal magazines or seeing their picture on the wall in the customer reception area. So generally, if the CEO came up and stood next to any employee in the organisation, the employee would likely not have the foggiest idea who he (at that time rather than she) was or what they doing standing next to them. However, when this approach of MBWA began to take off in some few organisations, again, similar to the Hawthorne Effect, employees were going, ‘Wow! The big boss actually came and paid me a visit – he didn’t say anything but his visit alone where there had never been one in the past history of the organisation had currency – it had value to the employee and made them think, incorrectly in most cases, that senior management cared about them. So they became happier and more productive at least temporarily.

In the period between 1987 and 1992, the Excellence Frameworks came into existence – Malcolm Baldrige Performance Excellence Award and the European Foundation for Quality Management Business Excellence Award. Both of these contained what even today represents the definitive approach for strategic management and performance improvement for any organisation. Included in each of them (as well as the Canadian Award and the Australian Award) all contain a major component related to Human Resources and those things an organisation should consider doing in HR if it wants to consider achieving world-class status. In these models there is one section that deals with what leadership needs to do as pictured below: 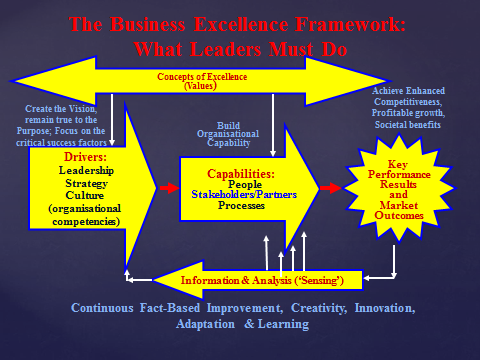 Again as you see, the concepts of excellence relate to the culture of the organisation. It is leadership’s role to create a vision and then a strategy which is the steps to achieving the vision. That strategy needs to develop the capabilities required in a number of areas as shown one of which is people.

In simplified form the ‘people’ component covers such things as shown in the following chart: 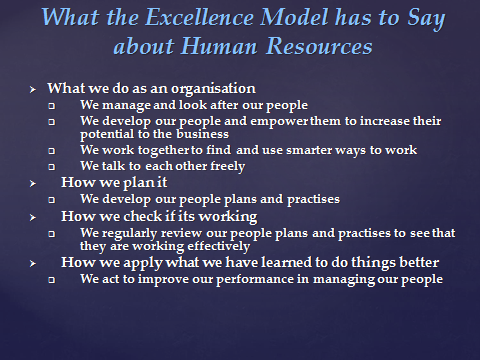 Here is an example of more detail behind part of the above chart on the Excellence Model: 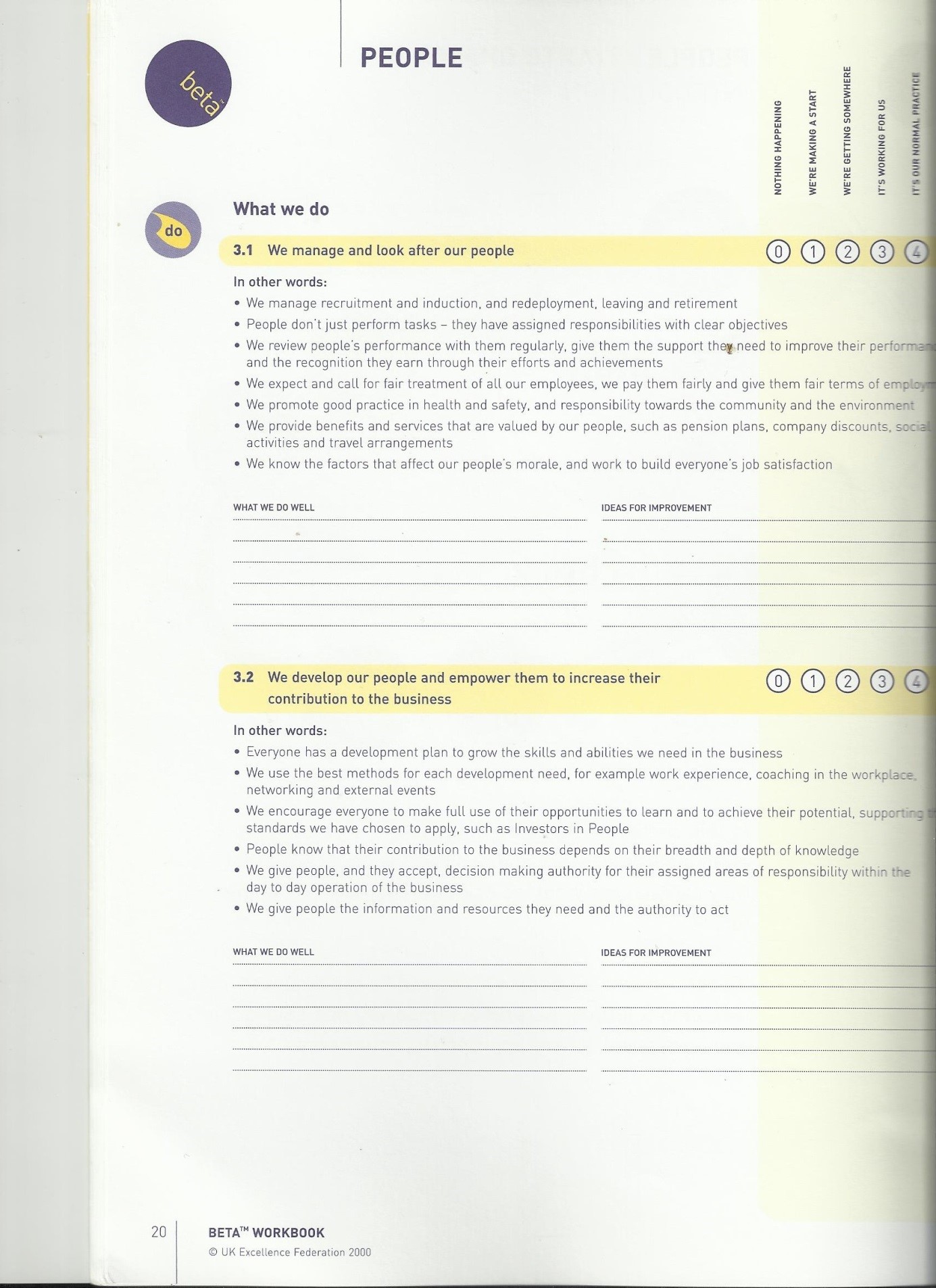 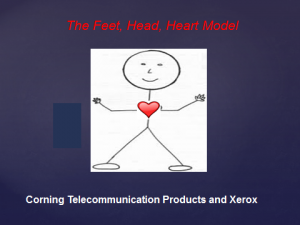 Even in 1992-1994 thought leading organisations such as Xerox and Corning Telecommunications Products, both Baldrige winners, had introduced the ‘Feet, Head, Heart’ model as their guiding philosophy for all their people management and development activity.

You see, for almost 100 years after Frederick Taylor, management’s approach was to follow the ‘3 C’s’. In essence the role of ‘management’ (there really was an absence of ‘leadership’) was to tell employees what they were going to do, when they were going to do it, how they should do it and with whom they should or shouldn’t do it with! When management said ‘jump’, your expected response was ‘how high?’ – end of discussion! 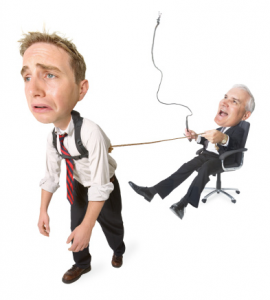 So what is the ‘Feet, head, Heart’ model all about? Well, in the beginning as stated in the above paragraph the tradition was to manage using the ‘3 C’s’. When your boss told you to do something, you just saluted and said ‘Yes Sir!’ and with your ‘feet’ you started walking off to battle. Not much thinking involved, just doing – and the faster the better. The situation probably looked something like the following

Fortunately, a few more enlightened organisations with emerging ‘leadership characteristics’, not just  traditional management characteristics decided that it make common sense – even help increase productivity, if employee were told ‘why’ they were being asked to do certain tasks rather than just telling them to do them. This was the appeal to the employee’s ‘head’ or intellect and recognising at last that employees had a ‘brain’ – it was a ‘eureka’ moment! It worked as you would expect. Treating employees with greater respect was well received.

Then one day, a few lone wolf individuals with expanded leadership competencies, reflected and realised that by an appeal to the ‘emotions’ they could unlock an employee’s energy, passion and emotional attachment (engagement) in a way that had never been done before. The ‘heart’ of course was always considered a person’s emotional centre. Using creative and inspiring techniques led to a quantum leap in innovation, excitement and commitment from employees. The rest was history. So 10 years after ‘In Search of Excellence’ we see some signs of intelligent life forms who are actually members of the leadership team in a very select few organisations.

In 1993, some 23 years ago a small company, Ames Rubber, won the Malcolm Baldrige Award, again marking it as a world class organisation. Just for your information, here is a small glimpse of the Human Resource process established by that company. Each element of this process goes into great detail from Deploy people to Develop People to Enhance Environment for Employee Well-Being and Effectiveness to Recognize and Reward People. What you see below is just the top level view: 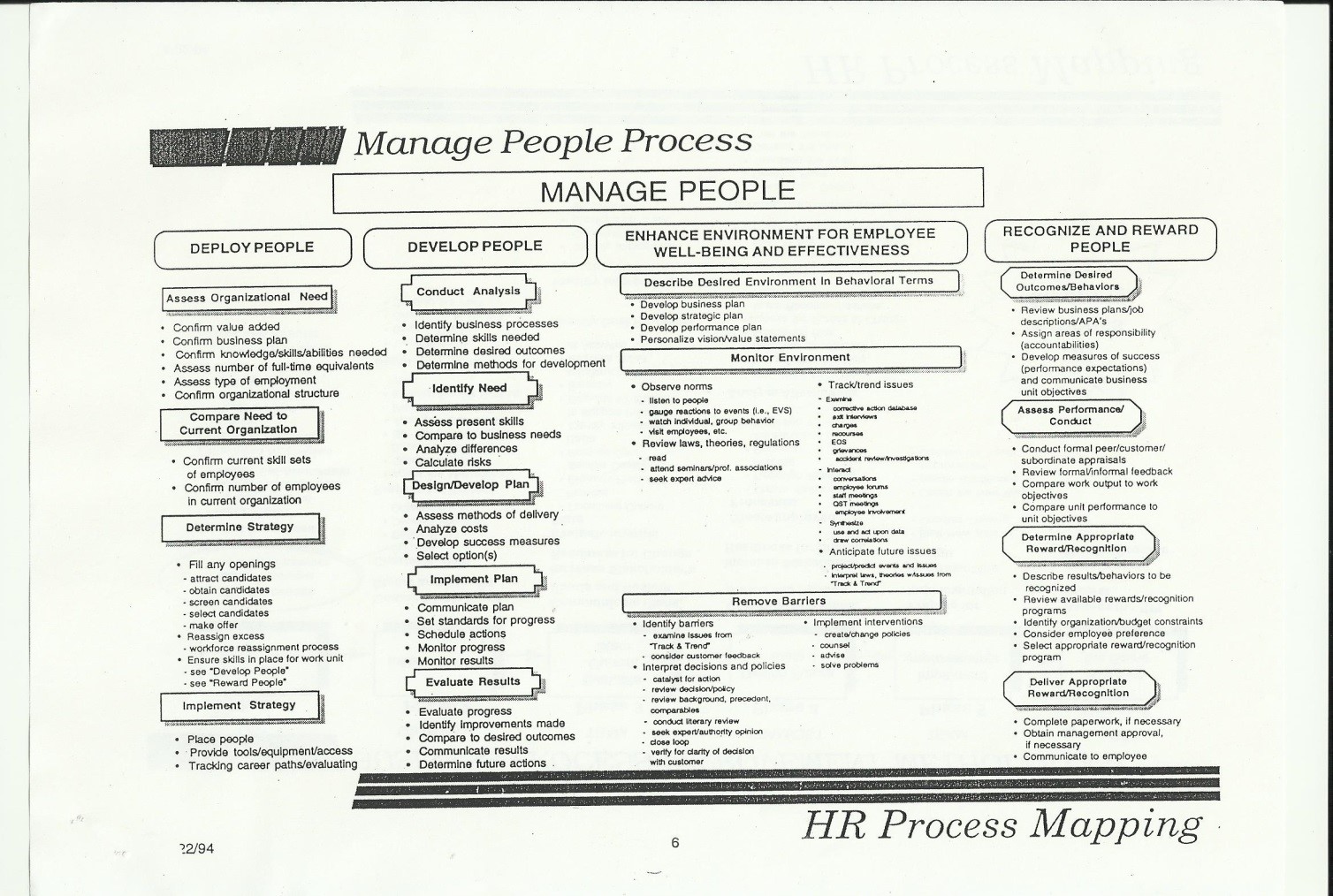 Around this time too, Dr. Marra worked with a Puerto Rican Bank – Banco Popular and, in so doing, found that they had an ‘Excellence Award’ given to selected employees. When an investigation was conducted to determine the criteria for giving out this award, it was found that it was given to employees who remained the greatest number of hours at their desk working – and falling asleep in the middle of the night while working hard to finish a project actually gave you extra points!

By 1994, Dr. Marra was conducting workshops for The Conference Board in New York City and ‘personnel’ was becoming known now as ‘Human Resources (HR)’ although few knew exactly what that meant as it seemed that except for a change in name, most of the same stuff was being done.  Read part 3 here.

What to Strategize When Expanding Your Business
The Era of Tech-Savvy: Going Digital and Digital Marketing