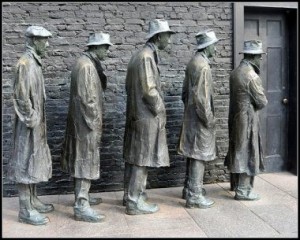 But, unfortunately, like many important books, ‘The Service-Profit Chain’ included, those that individuals really needed to read them like the Leadership Team did not bother to read them and so little benefit resulted.  The HR Professional community in many cases read them, but was not in a position to ‘move the needle’ or ‘shift paradigms’ held by the leadership team. As result, the hope was that we could move from a situation where employees coming to work look like this (on the right) to one where they 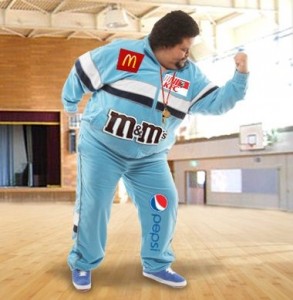 look more like this – excited about coming to work and working with their colleagues, learning and engaged in meaningful activity they have that ‘feel good feeling’ (on the left).

The problem is, as you may know, that after all that has been said and done regarding people – their being the most important asset, the fact that we have cold hard facts that taking care of employees results in bottom-line profitable growth, world-class examples among winners of the EFQM and Baldrige Awards (and others as well such as Johnson & Johnson, P&G, Google, Amazon, Tata and the list goes on) senior management has been conditioned by almost 5000 years of thinking about and treating the workforce as tools. It’s a paradigm that is proving hard to penetrate let alone eradicate. 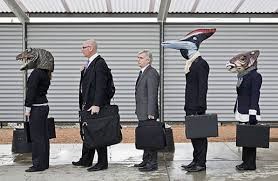 Unfortunately if you were to ask today’s ‘leadership’ to come to a ‘line-up’ as suspected criminals are asked to do in a police station (here they are ‘suspected leadership’), they might look something similar to that depicted in the picture to the right.

The majority of them still fall into the ‘dinosaur’ category or at least in the ‘Neanderthal’ class. This is true despite the billions spent of the years on executive development! As a few global surveys have shown, despite all that is spent on ‘educating’ senior executives, the quality of leadership globally has shown no signs of improvement. Disappointing to say the least yet this is just another huge reason why even the most talented HR Professionals seem to make no more than a small dent where they should have been able to pull off massive transformation or needed cultural change but because the CEO or a majority of the leadership team are still living in the past in terms of their thinking about people and people-centricity which they view as soft and squishy like quality of work life, little has happened.

So, more often than not, leadership – or what is supposed to pass as ‘leadership’ represents not just a bottleneck, but an almost impenetrable barrier to progress. You see, the reality is that in 90%+ of the situations where you see an organisation underperforming or failing, it is because of the failure of the leadership of that organisation. So clearly, leadership in organisations have a responsibility to do things better and to do them differently or, better said, ‘to do the right things right’ for the organisation which means for its people as the people ARE the organisation!

Here are just a few of them:

Here, for your information are of the ‘7 Deadly Sins of Management’ as determined through in-depth interviews with CEO’s and Managing Directors of major businesses in Western Europe such as Hewlett-Packard, Bombardier and many more. This is the ‘Dark Side’ – the ‘anti-role model’ side of leadership:

While ‘living on the Dark Side’ can be more destructive than leadership perceives, there are more critical responsibilities of leadership IF the reality of people- centricity and its power to enable an organisation to be more successful – led by a thought leading, change agent in the form of an HR Professional – is to ever be realised. A partial list shown below: 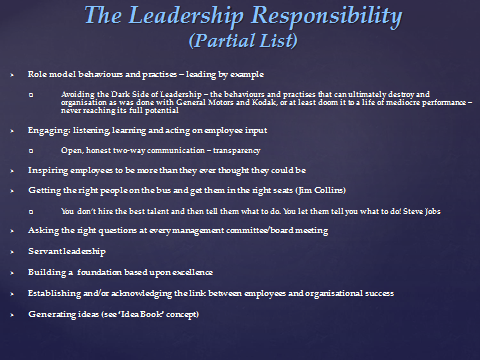 With respect to the last point, one often forgets that members of the leadership are just ‘people’ and that members of the leadership should be capable of creativity – if not, then it’s time for them to go! This is why an ‘Idea Book’ concept is suggested for the leadership team and the Head HR Professional – possibly others as well, although as we will discuss in the last section of this document, there will be other ways to unleash the creativity of your organisation which are simple, easy to use, incredibly efficient, and practical. 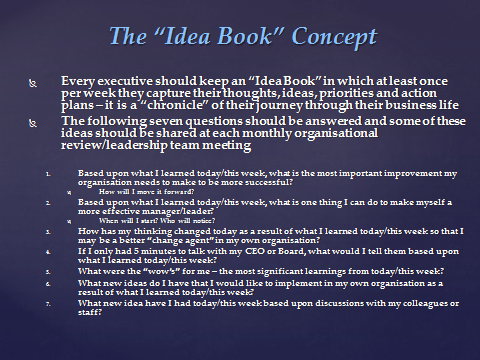 While the above should make for insightful and stimulating discussion in Management Committee meetings, the fact is that less than 1% or leadership globally has anything close to resembling an ‘Idea Book’. This is an incredibly disappointing fact for after all, one would have to believe that leadership is being compensated for being creative – being innovative as well.

Coming back, before we close this section, to some issues related more specifically to ‘people’, at a minimum, it would be great to see leadership at least address and discuss the two questions in the next chart: 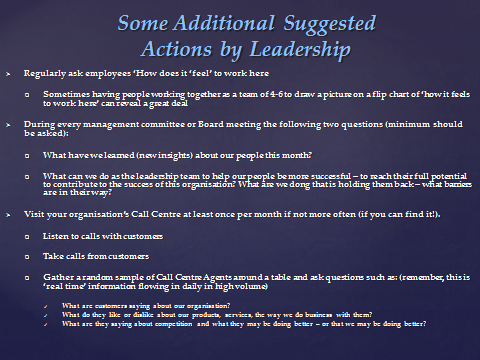 Toward Human Performance Excellence is where enlightened executives are driving their organisations, we hope. What do we mean? Have a look at the following diagramme: 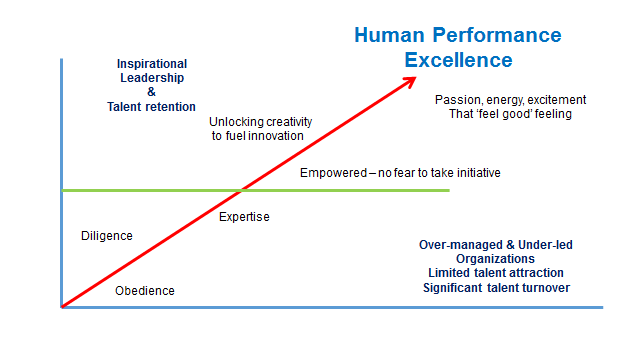 Obedience is clear – it is part of the old dinosaur method of management which I call the ‘3C’s’- command, control and coordinate. Management, in its infinite wisdom, will tell you, the employee (who is paid to work, not to think by the way) what to do, how to do it, when to do it and who to do it with. When management says to ‘jump’, your response should only be to ask ‘how high?’ Unfortunately many organisations around the world are still locked in the paradigm around the ‘3C’s.’

Diligence simply means checking your work to minimise errors which are costly – in time and money.

Expertise is desired because when you are an expert, you have fewer mistakes – things move more efficiently and without rework.

The organisation’s which are defined by these three human resource characteristics are most likely over-managed and under-led.  They are also riddle with policies which form an approach of ‘passive policing’ again to minimise errors, reduce adjustments or credits for customers even when warranted.

These types of organisations have difficulty attracting the best talent and would never show up on Forbes list of Top 100 Places to Work. Quite the contrary, possibly the 100 Worst Places to Work and so what few talented employees they have don’t remain long.

It’s not until you cross the barrier, like the glass ceiling for women’s pay, that you enter a more people-centric world.

Once above the green line, the key words are: enable, empower, inspire and engage your people!

They will not take the initiative if they have any fear. They must know that mistakes are a part of learning. In fact as Nelson Mandela once said, ‘I always win or I learn! I never lose!’ Senior management knows that the best way to move the organisation ahead is to allow experimentation – to try lots of things and see what works best.

However, you must understand that even when employees are empowered, they may not use it.  Read part 5 here.

What Does Your Hotel Booking Website Need to Improve User Experience?
How Is the Use of Technology Creating More Sustainable Farming?