Talent Management Is DEAD–Killed by Complexity!

The “War for Talent”

Since McKinsey coined the team in 1997[1], they have argued strongly that effective Talent Management (TM) is a driver of value creation in organisations. This has launched a spate of TM practices in consulting companies, as well as a multi-billion dollar industry for software vendors like Oracle, SAP, and IBM. Enterprises have responded by launching major TM initiatives in their organisations, and recent global surveys suggest that managing talent is now a major issue for CEOs in OECD countries.

It is a compelling argument: Manage the recruitment, performance, compensation and development of talented individuals, and you will be rewarded by superior value creation in your organisation. Indeed, McKinsey[2] and others[3] suggest that enterprises should focus on those practices that differentiate highly talented people and establish programs to reward and develop them as “high potential” (HIPO) employees.

However, my argument is that this may not be driving value creation the way we believe it is – particularly in the complex organisations of our modern era. Indeed, in some cases it may well be destroying value and limiting the natural adaptive qualities that we seek for organisations to thrive in changing environments. And a lot of this is due to the high levels of complexity that we find in our organisations.

What is the impact of complexity?

As our organisations have evolved through successive waves of technology since the industrial revolution[4], the levels of complexity within these organisations have increased. Complexity may be described as the increasing interdependency and interaction between the various parts within a system. This is due, in part, to the explosion of information and communication within and between organisations. 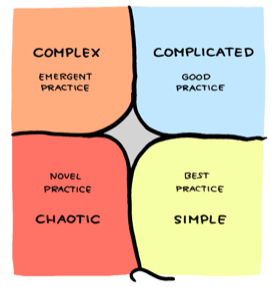 Snowden’s groundbreaking work on complexity[5] suggests that, as complexity increases in organisations, “best practice” becomes less effective because of the uncertainty and unpredictability of complex systems.

As we move into complex situations, Snowden argues that the system (the organisation) develops “emergent” properties – new capabilities to deal with the changing environment. Simply put, it means that complex systems work out unique ways to ADAPT to their changing environment, without direct intervention or control from above (senior leaders). This is a well established property of complex systems[6].

More importantly, these systems do not respond favourably to the conventional practices of management and leadership. Indeed, direct interventions can actually disturb the interconnectedness and interdependence, and thereby inhibit the system’s ability to adapt!

Using complexity theory to understand our modern organisations, we can identify three common errors made by leaders as they use Talent Management to create value:

1. Developing individuals in an attempt to develop the organisation

Working on the individual parts of a system does not improve the functioning of the whole. Because the organisation is a system, the parts of the system (although important) are not as critical as the way they FIT together.

2. Empowering individuals in an attempt to enhance the effectiveness of the organisation

Because individuals work within the system and interact with other members of the system, it is not the empowerment of the individual that yields best results for organisational effectiveness. Self management must be team-based. So, we need to focus on empowering the team.

The team’s output (effectiveness) is enhanced when the whole team is able to develop emergent properties and adapt to the changing environment. Again, this is a focus on the system, rather than on the individual.

3. Viewing a functional department as a team within a complex organisation

A team is a number of people who work for and with each other, and coordination occurs laterally, amongst peers. In general, they interact with one another with a focus on responding to their environment. Emergence and adaptation (to the changing environment) occurs as a result of the interdependent interactions within a team, not a group.

So How Can We Create Value in Our Complex Organisations?

Talent Management, with its focus on recruiting, developing and rewarding the individual, may actually be hindering the creation of value in organisations by disturbing the emergence and adaptation processes within teams. At best, it is not facilitating improved interactions within the organisation and thereby limiting the emergence of adaptive capabilities. At worst, it is hindering and even disturbing these interactions, and destroying the natural adaptive capabilities within complex organisations.

1. Focus on developing the organisation rather than its individual talent

While the focus of TM is on the recruitment, development and reward of talented individuals in the organisation, complex organisations are likely to respond more positively to a focus on the whole system – ie the way the various elements interact and are aligned to the business model.

Problem solving and adaptation in complex systems is about the quality of the communication and interaction between the elements. Clearly, we need to begin by having the appropriate quality of people on board, but value creation is enhanced more by enhancing their interactions than by “picking winners” and developing the individual skills of a few. And this improved interaction improves teamwork and improves the retention of valuable staff.

2. Operate as a “host” rather than seeking to directly control

Leaders should accept that no one can be fully in control in a complex system. They should invite people to participate in problem solving processes and trust in their natural creative abilities. The leader as host provides conditions and processes for people to work together and interact. And they show support for their people doing this.

Complex systems will almost always display emergent properties – ie they will develop higher-level capabilities than those they were initially designed for. This is the natural adaptation process within complex systems, and the leader’s role should be to keep bureaucracy at bay and to provide air-cover from other leaders who may wish to seize back control.

In addition to getting out of the way and allowing the organisation to operate, there are specific ways in which leaders can drive emergence and adaptation. These include:

I have argued that, in complex systems, the attempt to enhance organisational value by focusing on the development of individuals may be too narrowly focused. And let’s remember, most organisations that include people in a knowledge based environment, are complex.

While complicated systems such as a wrist watch can be controlled and their behaviour predicted, complex systems are somewhat unpredictable, and have higher levels of error and uncertainty. Rather than simply accepting this as some form of failure, we should recognise that these very properties also allow for emergence and adaptation – the very characteristics we seek in uncertain and challenging environments.

So while we continue to heed the development needs of our talented high-performers, let’s  not forget that we also need to develop the system as a whole and to facilitate the processes of emergence and adaptation.

Norman Chorn is a strategy and organisation development practitioner, who works in Australia, UK, New Zealand, and South Africa. After leaving a leading consulting firm, Norman founded strategy and research firm Brain Link Group with affiliations, in the UK and North America. His work embraces the research and insights from neuroscience and addresses Strategy (in highly uncertain environments), Organisation Development, Growth, and Corporate Resilience. His use of neuroscience principles has enabled the development of a range of proprietary techniques and approaches to achieve an enhancement in organisational performance. He holds visiting and associate appointments with a number of leading Graduate Schools of Management, including Macquarie University (Australia), the University of Pretoria (South Africa) and Canterbury Graduate School of Management (NZ).
View all posts by Dr. Norman Chorn →