Contributed by Ron Leeman on January 21, 2015 in Organization, Change, & HR 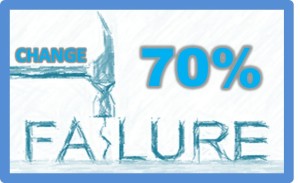 So now to tackle another much debated change subject–that so-called 70% failure rate.

Before we start in earnest on the subject, let just have a look at some of the headline statements on this subject from some of the most influential sources of business information:

But where did this much vaunted 70% figure come from? Is it a myth? Is it supported by hard facts/real evidence? The following two articles explain its origin and provide some compelling evidence that the figure is a myth:

But this figure actually provokes a more interesting debate–the one about how we measure success/failure in the context of change initiatives.

There is of course the traditional way. That is you measure success/failure against your original Business Plan in which there should be clear and detailed Business Benefits. The problem with this is that change initiatives have a habit of not going to plan and veering off in all kinds of different directions dependent on various factors that cause them to do this. So the problem is measuring against an initial set of Business benefits that no longer relate to the way a change initiative has developed.

So in effect your change initiatives/objectives will need to be re-focused along with identified Business Benefits on a regular basis based on the changing circumstances which will facilitate a much better focus on eventual measurement of success against these.

Then there are other ways.

In a paper called “The Change Trifecta Measuring ROI to maximize change effectiveness” by PwC suggests a four point formula to prove return on investment for change:

Additionally in an article called “How Do You Measure Transformational Change Success?” by Implementations Management Associates they suggest the following criteria:

In an article by Huffington Post called “Change Management Fails for Three Reasons” they cite the following:

In a Coaching for Change article called “Effective change management is all down to the right skill-set” they state:

An article by Goals and Achievements called “6 Reasons Why Change Programs Fail” they suggest the following:

An article by Project Smart called “Change Management in Practice: Why Does Change Fail?” they say”

And finally in a Change Designs article called “Why Change Fails” the following reasons are given:

Looking at all of these reasons it is arguable that the two consistent factors across all of them is that of Communication plus Stakeholder Management (both factors that underpin my Practical Framework Approach to Change) as if we didn’t know that already!!! Good grief haven’t there been enough studies by renowned organisations that have told us that over the years. So please tell me why is it that individuals that purport to be Change Manager’s so often do not give these critical factors the importance they deserve? Perhaps they become too engrossed in trying to deliver something within the constraints of an ill thought through plan and the pressures that go with that scenario.

So please let’s stop talking about this mythical 70% failure rate because it has no substance and no facts that support it. The longer we in the change community continue to talk about and write articles on the subject (like this one … LOL) it will continue to damage the reputation of Change Management and the people that practice the profession.

Ron Leeman has been involved in “change and process” work for more years than he cares to remember. He has worked extensively across the UK, Europe, and globally--and has an enviable track-record of delivering organisational change and process initiatives across a wide cross section of industry sectors. In 2012, Ron was bestowed with a “Change Leader of Tomorrow” award by the World HRD Congress “in recognition of my remarkable progress in initiating changes enough for others in the same industry to follow my example”. Ron is firm believer in knowledge transfer and now wants to share his vast knowledge with those who are considering getting into or at various stages of “change” and/or “process” work or those working on specific Projects wanting to gain practical insights into “how to” type situations. You can connect with Ron Leeman on LinkedIn here, where you can view his 85+ Recommendations and in excess of 800 Endorsements from clients and co-workers alike to give you an indication of the quality of service that he has provided and can offer. Ron is also a document author on Flevy. Browse his frameworks on Change Management, Process Analysis, and Program Management here: http://flevy.com/seller/highwayofchange.
View all posts by Ron Leeman →