Challenge Day 22: How to Develop Your Cultural Intelligence

Contributed by Hanane Anoua on March 17, 2021 in Organization, Change, & HR

Editor’s note: This is part of 30-day challenge series written by Hanane Anouna.   You can follow along and read the full series here. 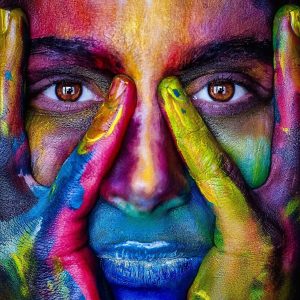 Communication within the same culture has been a challenging task nowadays. What about communication across cultures? Today we are living in a global village where everyone is connected with everyone. Globalization and digitalization turned the world into a small, concentrated community where we have to collaborate and communicate on a daily basis with different people from different cultures.

Cultural Intelligence is a subject very dear to me as I often worked in different contexts and had to communicate with people from different backgrounds. My great interest ignited my curiosity to read a lot about it and I end up teaching this subject to students from different countries and the learning was mutual.

Why is it important to understand cultures? How understanding different cultural contexts can improve our communication and our relations? How can cultural intelligence contribute to our personal growth both at the personal and professional level and impact our decision making?

In this article my aim is mainly raising cultural awareness and in the next article, I will be discussing models to improve communication in different contexts and explain how it can contribute to our cultural intelligence. Let’s start by defining a culture:

What Is a Culture?

A culture is a set of shared values, beliefs, norms, that create a cultural identity. Culture is the software of our minds that tell us what to do, how to do it and what not do. It does not have written rules but it still controls our perceptions and daily interactions.

According to Geert Hofstede, of the pioneers in this field, “culture is the mind’s collective programming that differentiates between one category of people and members of one group from another.”

To me, there is no culture better than another one. A culture is simply a way of living based on inherited beliefs and shared norms.

Why Is It Important to Understand Other Cultures?

To understand a culture, one should not rely only on the apparent part of the iceberg by looking at the words, signs and symbols but one should also look at the cultural values, priorities, beliefs, biases and stereotypes, which are non apparent but understanding them can make the communication more transparent.

We often try to understand the context and the behavior of others based on our own assumptions and interpretations while each culture has its own codes of communication.

That’s why, we all need more awareness to understand these differences that can affect our perceptions and behaviors. Mindful awareness can facilitate our interactions and communication, lessen our biases and misunderstanding.

Cultural intelligence (CQ) starts by cultural awareness of the major differences between the cultures. It requires consciousness but embracing an open attitude towards these cross-cultural differences, which may require a lot of patience and tolerance, is what will make the difference.

CQ is your ability to adapt your behavior within different cultural contexts.

Today, cultural intelligence is another major soft skill not only for people but also for organizations that aim to go global or those who are already functioning in an international context.

There are four stages to go through before developing a complete cultural intelligence.

Each culture has a set of values that determine their levels of priorities which can influence our communication and decision making. I picked up three major examples but you can find many others in different sources. 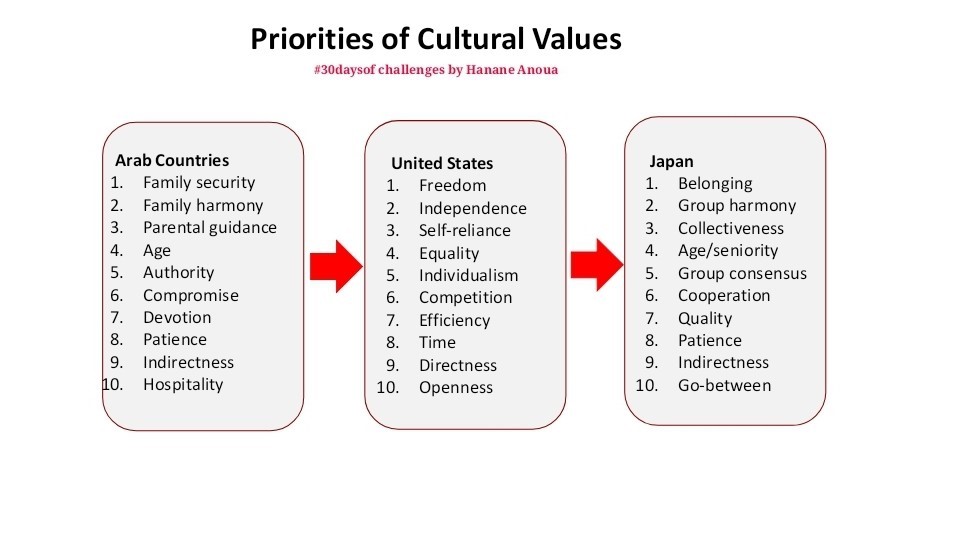 Many sociologists and anthropologists wrote about this field, and their approaches differ from one to another. One framework for approaching intercultural communication as defined by Edward T.Hall is with high-context and low-context cultures, which refer to the value cultures place on indirect and direct communication.

From my perspective, these approaches should not be taken for granted as we are living in a world that is evolving considerably where values and beliefs are shifting too.

They can serve us as basic tools for learning about other cultures but we need to add our own inputs, experience, and a human touch to understand the situation and the people we are dealing with. 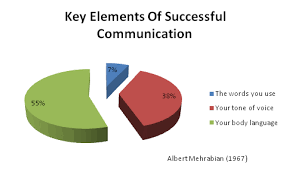 Just a reminder, words in our communication account for 7% only, our tone of voice accounts for 38%, and our body language accounts for 55% as stated in the communication model developed by Albert Mehrabian. But this model can differ from one culture to another

The rules of communication in this context are primarily transmitted through the non-verbal and are stated implicitly as the communication is less direct.

Nonverbal elements such as voice tone, gestures, facial expression, and eye movement are significantly important in these cultures. However, verbal communication is often implicit, and communication is seen as a way of engaging with others.

A message will be understood only with an understanding to the context people are in. Relationships are built on trust, and productivity is dependent on the quality of relationships with people. Social structure and authority are centralized. Space is not rigid in this context as people are comfortable in standing close to each other or sharing the same space.

Emotions and trust are more important than the meaning of the words.

Communication in a low context culture is direct and explicit, simple and straight forward. There is a heavy reliance on words and most of the communication goes through reports, procedures, written follow up and emails.

Someone from a low-context country like the US will find it normal to make a written recap after a meeting or a conference call, and send it by email while it may be perceived as a lack of trust in a high context-culture like Egypt, particularly if both parties know each other.

Social structure is decentralized and privacy is crucial. Indirectness is badly perceived and space is important. 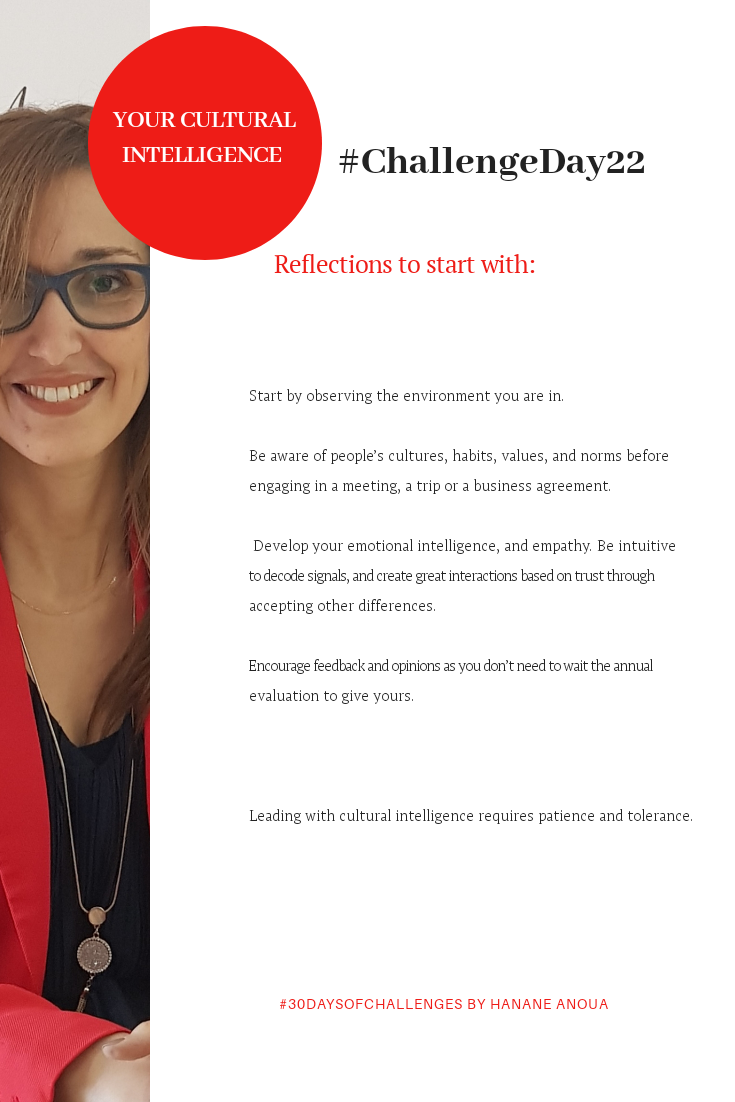 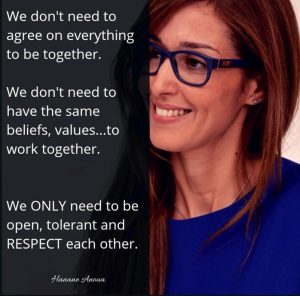 There is a high focus on arguments and persuasions than on emotions and harmony.

A lot of conflicts are not the result of our differences but our lack of understanding to each other. Cultural differences should not separate us from each other, but allow us to evolve and grow TOLERANT.

The more tolerant you are and understanding towards others, the more others will be tolerant and transparent towards you.

Based in Morocco, Hanane Anoua is a certified life and executive coach, mentor, entrepreneur, and passionate writer with more than 13 years of professional experience. You can connect with Hanane on LinkedIn here.
View all posts by Hanane Anoua →
Common Legal Battles Marketing Agencies Go Through
How to Launch a Successful Hair Transplant Clinic