Supervisors Do Things Right, Leaders Do the Right Things

Note from the Editor:  Charles Fiaccabrino is a seasoned executive with 50+ years of sales management experience.   Charles began his career at Hoffmann La Roche on April 1st, 1969 as the first diagnostics sales representative in the newly formed Diagnostics Division and helped grow the organization into a multi-billion dollar enterprise.  During his career at Roche, he became known within the company as “Mr. Roche,” having earned the Presidents Achievement Award an unprecedented 20 times and received written accolades from Roche’s former CEOs, Irwin Lerner and Patrick Zenner, amongst other executives.  We, at Flevy, asked Mr. Fiaccabrino to contribute a series of articles detailing how he helped grow Roche into the Fortune 200 corporation it is today.  You can read his other narratives here. 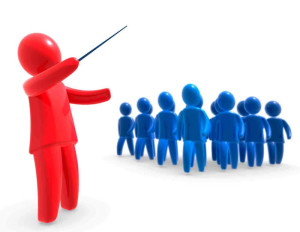 Supervisors do things right.  Leaders do the right things.

This quote did not originate from my mind’s eye as I perceived the magnitude of the responsibility of a Sales Manager. Particularly during the early phases of my career as well as long after, my development as a Sales Manager was an evolving process, always listening, observing, asking questions and most of all, having the challenging task of making the transition from the thought process of a salesman to the far more intricate mind set of working with and through people. The maturing process of a Sales Manager.

Emotional Courage / The Art of Implementation

What is emotional courage and how was it implemented? And how does this relate to the foregoing? Through my mind’s eye, emotional courage can be described as the ability to make tough decisions with a vision that the action taken was calculated to succeed. But what about the term implementation? For example, many of us have the requisite knowledge, to do “the right things.”  The question then is how many are true leaders and how many have the emotional courage to take the next step and do exactly that.

True leaders are not delusional, although throughout history, tyrannical individuals have risen to positions of power, enormous power that has changed the world’s dynamics and as a natural consequence, have unfortunately, been referred to as leaders.

Therefore, for the sake of compartmentalizing the essence of leadership and how it relates to all segments of a corporate structure, a true leader has a value system that invigorates the desire to follow said leader. In my segment in the Fiaccabrino Selection Process, we include a brief descriptive compilation of what amounts to leadership behavior and in reality the ability to use emotional courage to make decisions that turn out to be “doing the right things.”

Strategy Implementation and the Emotional Courage to Take Risks.

What follows are real life situations that can illustrate the connection between emotional courage as it relates to strategic initiatives.

In the implementation process, there is the initiator and the recipient. In order to best move forward, the initiator must convey a set of standards that are designed to influence the receptive cultural norm.

Some of the standards of behavior are as follows:

These are but a few foundation principles that allow for the implementation process to occur. We must bear in mind that emotional and leadership courage must be perceived by the follower or subordinate in order to allow for a receptive audience of one or many. Trust in what a leader stands for and the power of the leader’s behavior is the important first step.

Throughout a leader’s tenure, anger and frustration can occur. The key is to not allow these feelings to manifest themselves in your day to day decision making process. Do not make decisions when you are emotionally charged, but, wait perhaps twenty four hours, and by doing so, the perspective might change, which will allow for a clearer interpretation of the issue; and consequently will turn out to be a decision based on logic and not anger. Of course, should a situation be such that an immediate decision must be made, the true leader will allow for JUDGMENT to prevail and act in accordance with the immediacy necessary.

The author developed the Fiaccabrino Selection Process (FSP), a powerful methodology for interviewing and screening the best people for your organization. The objective is to select those people who will be the highest performers with the lowest turnover.  You can download a free primer of the FSP here: https://flevy.com/fiaccabrino-selection-process.

For the most part, delegating responsibility can be a risk. Mediocre managers have a propensity to delegate for the wrong reasons. Do they have the best of the best in place to assume the role? Are they delegating because they do not have the requisite talent and leadership ability? Are these described individuals risk takers or are they products of an inbred culture of mediocrity?

Delegating is an art form in the implementation process when the best people are in place and the leader and subordinates clearly understand who the leader is and, by virtue of their preparation and training, are ready and able to undertake the leader’s directives. It takes emotional courage to take the risk of delegation, however it is lessened by calculating the outcomes.

When is innovation a risk?

Strategy and tactics are important in moving an organization forward, but are they always on target? Looking at the short term or long term strategic initiatives can be impaired by viewing a situation through a misguided prism of reality. Sometime marketing organizations are slow to react to the mores of ever present day business action seen by the best marketing experts of all, the sales rep calling on the customer. Based on feedback and intelligence from the field representative, the leader can innovate to meet the demands of the marketplace. Innovation is a risk but worth taking if things are not working. If you fail, you have not followed company policy. However, should you succeed, you are the risk taking emotional courage implementer with flowing accolades supported by results the ultimate precursor of recognition  Again, your feedback must be accurate before you take the calculated risk that can have enormous impact on the company’s success.

At times a leader will risk future good standing with an organization by assuming enormous risk. A case history by an anonymous contributor follows. In the following there is a difference between logical innovative approaches to risk taking and the often justifiably maligned “lone ranger” syndrome. What follows is the former.

In this case study, the organization had to make an enormous decision on a product that, based on all marketing research and focus group studies, had the potential to have a high impact on the prevailing market. The product was launched.  However, the results were not as expected. As I understood the problem, upper management’s views, although well intention, did not fully grasp the thinking process of the customer. And so, a decision was made to abort the campaign to sell this amazing and innovative product and send it back from whence it came, the scrap heap of failure.

There were some who did not see the future of this product in the same abysmal light and so a person spoke up. This anonymous unnamed individual did not view the same situation through the same prism of failure. A meeting with the top decision maker was requested and granted. At this meeting, ancillary members were present which included the marketing manager who had a view of the matter as did the anonymous individual.

At this meeting, the unnamed person made a proposal to upper management (the nature of which prevents me from divulging the details in order to protect the contributor’s identity of this episode).

The proposal was to allow this individual to place this product in three strategic locations in the marketplace along with a different strategy that was designed to have a much better opportunity for success. There was one proviso based on a passion for a challenge that would ultimately lead to success. The proviso offered by the contributor was this. “Let me do this, because I believe in the product and if it fails, you can terminate me.”

The offer was accepted.  The plan was placed in motion and the strategy resulted in a new rebirth of this extraordinary product to the extent that it became a big fiscal winner.

The morale of this segment is: Have the power of your convictions and have the emotional and leadership courage to take risks and as a natural consequence, “do the right things.”

I wish to take this opportunity to acknowledge the originator of the term “Supervisors do things right, Leaders do the right things”.

I heard and read about this during the tenure of Irwin Lerner, the then CEO of Hoffmann La Roche. His leadership and professionalism had a very strong inspirational impact on my career and I will always be thankful.

There was another person who was instrumental in how we view SUCCESS.

Bob Copeland was my National Sales Manager and the man who promoted me to Sales Manager in 1975. He was my mentor and provided me with more information and magnets of success than any one that I came in contact with during my career. I have never met an individual with more intelligence, insight, and sense of character than this great man. I was and am blessed by this association and friendship.