Contributed by Peter DiGiammarino on July 24, 2017 in Management & Leadership

Editor’s Note:  Peter DiGiammarino is a professional CEO and founder of growth strategy consulting firm, IntelliVen.  IntelliVen is also an author on Flevy, producing a series of frameworks covering a variety of management and leadership topics.  View all this Flevy materials here.

Leaders set direction, aligns resources, and motivates action as suggested by the panels in Figure 1.  Another way to put it is that a leader develops,
holds, nurtures, communicates, and drives to achieve a vision.

As in Figure 2, it helps to think of the leader holding a map, like Harry Potter’s Marauder’s map that is always changing, making sense of it, and navigating the course with those led looking on. Wise leaders constantly check with their top team to confirm that they are headed toward the same goals, in the same way, and for the same reasons. 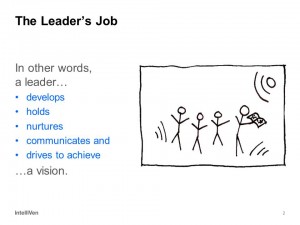 Figure 2: A leader develops, holds, nurtures, communicates, and drives to achieve a vision.

The best leaders are always open to input from their top team to tweak goals and plans along the way. Clarity starts with the leader.  If the leader is not clear then no one else can be clear.  A leader either:

When things fall off track such that the status quo is no longer acceptable the organization will founder until a new vision and plan to achieve it are formed and communicated.  To regain its footing a leadership team might go offsite with a facilitator to develop a new vision and game plan.

Preparing for and conducting a facilitated session can accomplish a lot.  It can help a leader get clear by serving as a forum in which to talk about ideas and plans; it can help a leader who thinks they are clear to test for alignment among their top team; and it can inform a leader who is coming up with a vision by getting feedback, ideas, and push-back from those he or she most trusts.

On the other hand, a vision does not magically appear from any facilitated process.  Without someone asserting a vision for the group to react to, work on, and push and pull into something they can all align around, the group will be ineffective. Many vision-setting exercises get stuck because no one in the group is comfortable enough to put forth a specific idea for fear that:

In the session, select one from the above or from what otherwise occurs, and start with that as if it were the vision.  Iterate on it until it becomes clear that it is right and alignment can be achieved, or set it aside and work with another.

Repeat until a vision to align around is found even if it takes several sessions. If participants share their thinking openly, fully, and honestly they can go a long way towards achieving the needed clarity.

The one who then holds the results of those efforts and who furthers its development, communicates it to stakeholders, and aligns and drives resources in its pursuit is effectively filling the role of leader.

Peter DiGiammarino is a senior executive with over 30 years of success leading businesses that target tight public and private markets around the world. In addition to running companies, he serves public, private, private-equity-owned, and venture-capital-backed software and services firms as an adviser and/or board member and has consistently helped them to achieve their full potential to perform and grow. Peter currently serves on boards and advises leaders as CEO of IntelliVen. IntelliVen is also an author on Flevy (view materials here).
View all posts by Peter DiGiammarino →