Strategy Is Dead! A Premature Obituary?

I’m bemused by the repetitive announcements that “strategy is dead” and has no place in our rapidly changing and uncertain business environment. Pundits claim that:

Despite the fact there is wide agreement that strategic skills are a core requirement for leaders of the future (1,2), there is a popular belief that our organisations should simply focus on being agile as a way of coping with current conditions (3,4).

My belief is that this is a potentially dangerous view, and is based on three flawed assumptions about strategy: 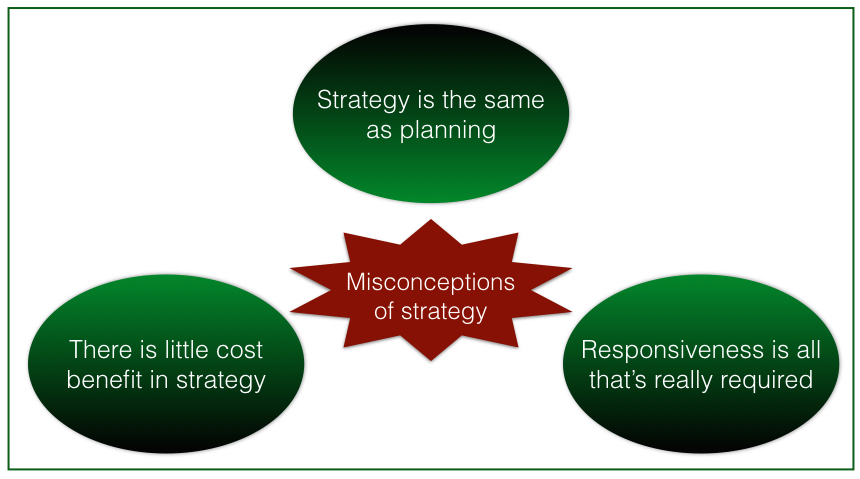 Why Are These Assumptions Flawed?

1. Strategy is different to planning

There is frequent confusion between ‘strategy’ and ‘planning’, and the terms are often used interchangeably.

Planning is the process whereby we set a specific goal or objective ahead of the time, and then develop a series of steps and milestones to achieve that objective. It is generally useful in a shorter time horizon when the conditions and constraints are relatively well known. An example is a plan to move your office to a new address on a particular date.

Strategy, on the other hand, is an ongoing process whereby we consider the position of the organisation within its operating environment. It is fluid and characterised by a series of aims, rather than specific goals. An example is a game of chess, where a move by either player causes the entire chessboard to change and requires a rethink of your position.

Strategy is NOT planning. It is not concerned with a prediction of the future nor the setting of specific and pre-determined objectives. Instead, it is a continual learning process where we seek to understand the system of which the organisation is a part, and the leverage points that we might influence.

2. There is real payoff in developing strategy

The argument is that the strategy process is time consuming and laborious – and that the results are somewhat ineffective in the rapidly changing environment.

Pundits argue that a better allocation of corporate resource is a series of short, sharply focused projects and tactical responses to the changing environment.

But the research and empirical evidence shows otherwise. A recently published research paper by McKinsey across several industry sectors (5) shows that this form of short-termism is actually more costly to organisations. Organisations engaged in regular strategic conversations produce superior results across a wide range of metrics, including profitability, growth and innovation (6).

Disturbingly, evidence suggests that the trend to short-termism is increasing as organisations grow increasingly dissatisfied with their traditional approaches to planning. However, even those organisations with a prevailing short-term operational focus can benefit by beginning a strategic conversation that engages a longer term perspective (7).

This is an extension of the previous argument – ie: that a more productive approach is to focus on being responsive to changes in the environment and customer requirements.

I’m not suggesting that organisations should ignore the shifts in external conditions and customer needs. However, the problem is that many organisations become so action-oriented and reactive to these changes, that it drives out strategic conversation and longer-term thinking. Action is the enemy of thought in these situations.

Again, the evidence from research is revealing. By describing organisations in terms of their dominant operating style, we can identify the following four styles of organisation (8):

Numerous studies with different markets, products and organisational sizes have found consistently that Reactors underperform the other types in terms of growth, profitability, sustainability and value (9,10,11,12).

My argument is clear: Organisations who favour fast response and reaction over well thought through strategy, are not likely to be rewarded with consistent growth and profitability.

So, What’s the Point of Strategy?

Why should you spend the time and effort to develop strategy in this rapidly changing and uncertain environment? I point to three factors:

I recall my experience watching the first Gulf War as it was covered by CNN in 1990. This was the first time people were able to watch war scenes “live” as bombs landed and planes took off from aircraft carriers.

But for many, it was a confusing experience. It was difficult to figure out what was really happening and why – we were too close to the action with no overarching narrative of what was happening!  Only through the discussions by commentators and experts were we able to understand and make sense of all the vivid action.

Predicting the future is usually risky in an uncertain environment. This makes conventional planning much less effective. Strategy, on the other hand, is concerned with understanding the system of which the organisation is a part.

By understanding the system and the interdependencies of its key elements, it is possible to determine a range of possible futures for how the system will unfold into the future. Strategy doesn’t seek to predict the future. Instead, it recognises that the organisation faces a range of alternative futures due to the uncertainty in the environment.

Once we understand the range of alternative futures faced by the organsation, we can then define the capabilities required to cope with these futures. In this way, strategy assists in preparing for uncertainty by building resilience – the capabilities necessary to operate.

One of the earlier and perhaps most important contributions to our understanding of strategy was made by the Prussian general Claus von Clausewitz (13). “On War”, published in 1832 after his death, outlines many significant principles of strategy.

Von Clausewitz argues that a successful “attack” strategy is dependent upon the convergence of resources – an aligning and focusing of capabilities and effort around a broad philosophy or aim. This convergence enhances the effectiveness of the resources and leverages overall capability.

We understand this principle as the benefit of focus, particularly when one has limited resources. However, the point being made is that convergence is enabled by way of a well thought through and internally consistent strategy. This strategy embraces both an understanding of the system within which the organisation operates, as well as an internally consistent philosophy of how the organisation will interact with this system. More about this later. The key point, however, is that strategy enables a significant enhancement of organisational capability through the appropriate convergence of its resources (14).

So, how do we achieve successful strategy in these complex and uncertain conditions?

I suggest three processes to assist in improving the use and effectiveness of strategy in these conditions:

A “rich picture” outlines the various elements in this system and how they interact with one another. It also describes the points at which the organisation interacts with the system, and the nature of the various leverage points within the system.

An example would show an organisation and its relationship to its customers, factors that influence demand, relevant legislation, suppliers, competitors, stakeholders, processes for converting inputs into outputs, and the nature of the challenge or problem being addressed by the organisation.

The rich picture produced by this process is an important input into the second process – the strategic conversation.

Strategy can be viewed as a conversation that takes place though the organisation. As with any good conversation, understanding increases with greater participation and it benefits from the diversity of perspectives and opinions.

Strategic conversations can be thought of as a system with several elements, including the following:

Strategic conversations are an important input for the third process – the use of scenario thinking and planning.

The use of scenarios is a way of flipping an issue that causes logjams in many strategy discussions. The logjam is often caused by an argument that rages about the nature of the future – “what are the future conditions into which we are trying to set our strategy”? Because we cannot agree on a precise enough definition of the future, we often set broad and vague plans that provide little guidance for explicit actions and initiatives. This is a common failing of plans.

Scenario thinking changes the question from “what will the future be?” to “what will we do if the following futures occur?”

By using the insights gathered from the strategic conversation, we assemble a range of alternative futures faced by the organisation. These represent the different scenarios that are driven by the key uncertainties and change drivers in the environment.

The current ‘business idea’ (value proposition, business model) is then wind-tunnelled in these different scenarios of the future. We can then define the key changes to be made for operating in these future conditions. By embracing the uncertainty in the environment (instead of simply predicting a single set of operating conditions), we are able to create a more resilient organisation for the future. In addition, we are able to generate a series of innovative ideas that can enhance the strategy and capability of the organisation.

Strategy Is Alive and Well

‘Strategy’ is not limited by conditions of uncertainty and change. Indeed, it is the very testing ground in which we can prove the usefulness and effectiveness of strategy. Rich pictures, strategic conversations and scenario thinking are three critical processes to ensure that strategy makes a significant contribution to navigating through these treacherous waters of complexity and uncertainty.

Norman Chorn is a strategy and organisation development practitioner, who works in Australia, UK, New Zealand, and South Africa. After leaving a leading consulting firm, Norman founded strategy and research firm Brain Link Group with affiliations, in the UK and North America. His work embraces the research and insights from neuroscience and addresses Strategy (in highly uncertain environments), Organisation Development, Growth, and Corporate Resilience. His use of neuroscience principles has enabled the development of a range of proprietary techniques and approaches to achieve an enhancement in organisational performance. He holds visiting and associate appointments with a number of leading Graduate Schools of Management, including Macquarie University (Australia), the University of Pretoria (South Africa) and Canterbury Graduate School of Management (NZ).
View all posts by Dr. Norman Chorn →