How Should the Traditional Car Makers Respond to the New Competition?

Driverless cars will be the next ubiquitous thing in the coming years. Although the future is abstract, few of the new age Technology companies like Tesla, Google[1], Uber and Apple are disrupting the automotive landscape previously dominated by Toyota, Volkswagen and Ford Motors, General Motors and NISSAN. The chip manufacturers of the likes of NXP Semiconductor, Applied Materials, Cypress, NVIDIA, and Mobileyeare currently betting big and investing heavily in their research and technology portfolio (R&D) for the launch of driverless cars by the dawn of this decade. 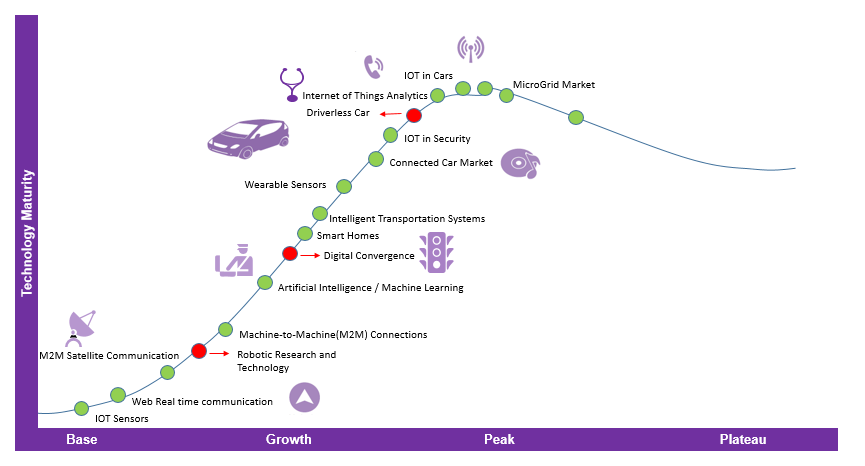 As technology evolves from 360° radars, panoramic high-definition cameras, Smart navigation, Artificial Intelligence, automatic traffic management system to electric self-driving cars, the driving machines get intrinsically bonded with the technology companies. Policy regulations along with the paradigm shift in the societal patterns will force the traditional Car Makers to innovate or perish in the race for Automotive Leadership in the coming years. 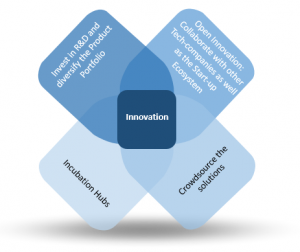 Fiat Mio, BMW’s co-creation LAB, Volvo’s “You inside” app, Audi Production award and Arizona’s Local Motors are examples which reinstate the fact that Open Innovation is the shaping the future of Automotive Industry[2]. Both inbound (i.e. technological acquisition, where new ideas flow into the organization) and outbound (i.e. technological commercialization) models help in the co-development of projects. It is predicted that 90% of future automotive innovation will be driven by IT[3]. The convergence of Semi-Conductor companies and OEMs[4] on a digital landscape is bound to happen. Open Innovation platforms are being co-created across the globe in collaboration with premier universities and the next big idea will come from a College Competition or from an entrepreneurial challenge.

Many of Venture Capital funded Tech start-ups (e.g. Google, Amazon, Uber et al.) have eventually raised an IP0[5] and changed the Innovation fabric. The Car Manufacturers should incubate an entrepreneurial ecosystem within their premises. This can be a corporate accelerator where the hypothesis or concept can be tested in two weeks. The validation, the strategic roadmap and tracking can go up to twenty weeks depending on the prototype. The in-house team should provide support through weekly meet-ups and the external mentors and likeminded peers may provide the much needed network for the participants. In the process the ideas get a nurture-pad within the company, which will restrict attrition and bring out the entrepreneurial talent of its employees[6].

Local Motors[7], FIAT Motors[8], Mobileye[9]are leveraging the crowdsourcing platform to build applications for the connected Cars. By 2020, the European Union as well as the United States have mandated that all vehicles be equipped with autonomous emergency braking systems and forward collision warning systems[10]. Many of the semi-conductor companies are riding on this wave to get a pie of the automotive economy by directly collaborating with the car manufacturers. Now the traditional OEMs should bank upon the crowdsourcing platform to beta-test their software algorithms and prototypes before collaborating with the semi-conductor companies. This will allow them to have a strong foothold before entering into partnerships.

The demand for advanced driver-assistance systems (ADAS) that helps in monitoring, warning, braking and steering tasks has risen. Many of the semiconductor[11] companies like Intel, NVIDIA, Panasonic, Qualcomm, Samsung and Sony are investing in the new age automotive technologies including the sensors, microcontroller units and electronic control units. Currently they get $2 Billion of revenues from ADAS, compared to the $29 Billion for Automotive Electronic Systems. AS they up the ante, the traditional car manufacturers should also increase their R&D[12] budgets by more than 20% to match-up the demands of partnerships.

Apple is currently developing an electric car, codenamed Titan[13] and plans to unveil the secretive automotive project by 2019. Audi has already launched the RS 7 Concept vehicle, demonstrating its piloted driving system for automatic parking. BMW and Baidu are working on a side project to produce self-driving cars in Beijing and Shanghai. Ford Motors has collaborated with UC Berkeley and San Jose State University to research on ‘Sensor Fusion’ which gives a 360° panoramic vision.Self-driving Chevrolet Volts,Honda and Nissan Cars and Mercedes- Benz future truck 2025 are all gearing up for the coming decade where driving cars may be illegal or a hefty fine would be levied on the manual driven cars to drive adoption of the driverless cars.

A decade from now, the cars running on our streets will be very different from the cars that we can imagine driving. Technology companies will turn transportation into a pay-as-you go service. The policies by the government and the regulatory bodies will define the automotive infrastructure and overall landscape. Automation will drive thousands of job losses in the Automotive Sector. The entire automotive value chain and the ecosystem supporting the current OEMs will go through mammoth shifts. Garages, traffic signals, driving licenses, car dealers, gas stations, auto after-sales, energy grids, fuels including petroleum products and fossil fuels, Vehicle insurance and MicroGrid landscape will be altered.

With the driverless car gaining momentum in the post 2020 era, Innovation will again reach a plateau. And we will be preparing for the next technological wave. Will it be Hyperloop? Will it be Man-Machine interactions? Will it be another sci-fi movie? We don’t know the answers yet. The question is now on the safety and security of the passengers of these connected driverless cars.

New safety and security companies may take the center-stage. Companies preventing personal data hacking and security breaches will play a major role in protecting an individual’s ‘Right to privacy.’ Our lives may be connected but we may be taxed for the luxury of privacy. That’s the future we should be prepared for.

Saswat Sahu is a management profession with extensive consulting experience across continents. He has been a delegate at the World Business Dialogue and HPAIR conferences. He is currently delving into consultative storytelling and application of game theory principles in management. You can connect with Saswat on LinkedIn here.
View all posts by Saswat Sahu →
5 Ways to Ship Products Like a Pro
How to Strategize against Cyberattacks