Change Resistance: “Change? No, Not in My Backyard!”

Contributed by Ron Leeman on January 14, 2015 in Organization, Change, & HR 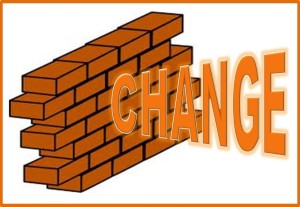 Another much written about and discussed subject is change resistance, so here is my take on the subject.

Let me start by saying that life is all about change. From a personal perspective, we change continuously from the day we are born to the day we die. While some of these changes happen as a matter of course, some of them don’t. In fact, we often instigate changes in ourselves and in our lives. We change our looks, we change our hairstyles, we wear different clothes, we change our jobs, our cars, and where we live. We change who we hang out with, we change political allegiances, we change our minds about things… change, change, and yet more change. Why is it that we can make these personal changes without any problem, yet when it comes to changes in the workplace we tend to resist them? The reason is that our personal changes result from our own decisions. Our workplace changes result from someone telling us that we have to change and we have little choice, so we instinctively resist.

OK, that’s the opener done with–let’s start with a few “nuggets” I managed to find doing a bit of “quick and dirty” Google searches about change resistance.

From a Management is a Journey article called “Organizational Change: 8 Reasons Why People Resist Change:”

From a Change Designs article called “Why People Resist Change:”

And finally, from Psychology Today in an article called “Are You Resisting Change?” a simple to reflect on whether your response to change has gone well beyond the natural reaction to learning something new into the destructive zone:

Some great insights to change resistance, but I really like the above questions.

As well as the above, I kind of covered a number of things to try and prevent resistance in my article called The 4 Ion’s of Change, but I will go a little further in this article.

The status quo gives individuals within an organisation a sense of security. Within reason, people will cling to what they know and understand, because change brings uncertainty, fear and anxiety. Attitudes “it may be a dump, but its home” are real attitudes.

The fact is that change is inevitable, and its effects on individuals well researched and documented. Individual’s feelings and attitudes are critical to the successful or unsuccessful implementation of change. Knowing how to overcome the natural resistance to change you and your team are able you to implement changes more effectively, minimise the negative effects of change on performance, and optimise your own and your team’s chances of success in a difficult time.

The implications for individuals and the organisation of not managing change effectively range from having an unwilling and resistant team through to the organisations inability to adapt and respond to new market conditions.

The effects of change can be traumatic. As the familiar landscape disappears people increasingly feel a sense of threat. Reactions typically include:

It is essential for Change Managers to understand the impact of change on individual performance.

But why do people resist change?

Employees place a high value on security. Considerations of efficiency and security may well seem to conflict and where people feel threatened by a change i.e. it makes them feel insecure – they are likely to try and defend their interests and to resist, or attempt to modify, its perceived impact on them.

What is sometimes viewed as unnecessary increased working hours, over manning, inefficient processes, time wasting, inflexibility and restrictive practices may be perceived by employees as essential means of protecting their earnings levels and their jobs, as well as being culturally significant in providing individuals and groups with a sense of status, involvement and identity. When an attempt is made to change any of these practices it may provoke very profound feelings of insecurity and violate cultural beliefs and customs of very great significance to the people concerned.

Certain individuals may be pre-disposed to resist change more than others. Psychologists may relate this to personality factors, produced by a person’s experience during their lifetime. Those with a background of insecurity in childhood, for example, may have particular fears of a proposed change without apparent objective justification. On many occasions, however, resistance to change is based on a rational and realistic assessment of the implications the change could have on for different individuals and groups; and it should not be seen by those seeking to introduce the change as merely blind, instinctive intransigence, or a product of human nature. Specifically, employees will be concerned about the effect of proposed changes on their long-term future with the organisation, their jobs, their pay and their relationships with other colleagues.

Employees’ first reactions to proposed changes will probably be “am I likely to be out of a job as a result of this change?” There may be considerable suspicion of managements’ motives in introducing the changes: is it a backdoor way to shed resources? Loss of a job is a very serious, often traumatic, prospect for employees, because it means a loss of social status as well as earnings. Employees may also be concerned about the effects of change on promotion opportunities and their career structure.

There may be concern that proposed changes threaten status e.g. reducing the opportunities for key employees to make their own decisions about how to go about their tasks, particularly where changes in working practices are prescribed by experts. They may feel that the ‘improvements’ proposed imply a criticism of the way they have been doing their job in the past and hence of their effectiveness. They may be apprehensive about having to learn new ways of working, or even having to train for a new job altogether. The fear of failure in learning new skills is a very real one for it means a loss of face as well as greater overall insecurity. Employees may, therefore, ask themselves:

The impact of change on remuneration/pay is likely to be a matter of immediate concern–will earnings be lost as a result? Some incentive plans are very complex and workers find it hard to calculate their likely gains and losses. There may also be concern about stability or earnings, in the short term, particularly where training for new tasks or processes is involved. In the longer term, employees who feel skills are being eroded may be concerned about their future value on the employment market.

Of course, the employment contract is one which involves a pay/effort bargain and employees will evaluate the effects of changes on this equation:

Relationships with others – friends, colleagues, superiors and subordinates can be important in determining how employees feel about their jobs. Responsibilities, loyalties, understandings and affections develop between individuals and groups over time and give them a sense of belonging and identity. When existing relationships are threatened and employees are faced with the prospect of having to establish new ones, a sense of insecurity and unhappiness may serve to provoke resistance. Employees faced with changes in the structure of their working groups may ask themselves:

Preceding events can influence attitudes towards a proposed change. Employees will view it in the context of an organisations past policies, practices and attitudes; the characteristics of its management – particularly the extent to which they have proved trustworthy in the past when they have carried out changes – and employees experiences of the after effects of previous changes of a similar kind. Current and historical, national or regional factors may also influence reactions, particularly the opportunities for alternative employment on the traditional employment market. In other words, past events are often seen as precedents for future occurrences and employees’ expectations of future changes will be heavily influenced by past experiences. Where there is low trust between management and employees, the prospects for introducing change smoothly are jeopardised.

The process of effecting a change often involves an increase in the number of orders given to subordinates, as well as the involvement of specialists in day-to-day work. These processes may well be resented, particularly by employees who pride themselves on their knowledge of their job and value the freedom to make their own decisions. Resentment may be particularly acute if orders appear to be arbitrary and unilateral. This may occur because people have not been given enough information about the objectives, nature and effects of the proposed change so that they cannot see the point of the measures being introduced and of what they are being told to do. In general, insufficient information and consultation about the change and its probable effects and implications may cause people to become concerned. Imagination, hopes and fears, supported by rumour, can increase anxiety.

Consulting people about change gives them the opportunity to put their point of view, ask questions and seek reassurances. It also shows consideration for them as individuals, rather than as a group.

If a change is presented as irreversible and irrevocable it is likely to generate suspicion and fear and the timing of a change must be considered. People need time to adjust their thinking to new conditions and they are likely to feel bewildered if change is rushed through.

When resistance to change exists, it is not so much the change itself that is opposed. Rather the primary causes of resistance to change are both the imagined and real effects on those involved, together with the manner in which the change is introduced. The key problem in making a change is how to minimise resistance from those involved. The aim should be to reduce resistance rather than attempt to overcome e.g. by threats, sanctions and other forms of coercion, which may only serve to reinforce opposition.

Ron Leeman has been involved in “change and process” work for more years than he cares to remember. He has worked extensively across the UK, Europe, and globally--and has an enviable track-record of delivering organisational change and process initiatives across a wide cross section of industry sectors. In 2012, Ron was bestowed with a “Change Leader of Tomorrow” award by the World HRD Congress “in recognition of my remarkable progress in initiating changes enough for others in the same industry to follow my example”. Ron is firm believer in knowledge transfer and now wants to share his vast knowledge with those who are considering getting into or at various stages of “change” and/or “process” work or those working on specific Projects wanting to gain practical insights into “how to” type situations. You can connect with Ron Leeman on LinkedIn here, where you can view his 85+ Recommendations and in excess of 800 Endorsements from clients and co-workers alike to give you an indication of the quality of service that he has provided and can offer. Ron is also a document author on Flevy. Browse his frameworks on Change Management, Process Analysis, and Program Management here: http://flevy.com/seller/highwayofchange.
View all posts by Ron Leeman →