A Framework for Constructive Co-Worker Feedback

Contributed by John Estafanous on June 11, 2021 in General 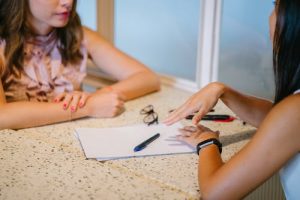 Feedback is a vital component of a successful, growing business. Without evaluation,  constructive criticism, and positive reinforcement, a business will remain stagnant, missing out on learning opportunities and doing better.

There is a stigma surrounding peer to peer feedback in the workplace; a general sense of nervousness felt by employees. Interestingly, it surprises many people to learn that their co-workers feel equally anxious providing feedback. Regardless of whether the process of giving or receiving feedback is comfortable, though, it is critical to establishing appropriate corporate culture and long-term business success.

At the most basic, foundational level, good feedback should help both the giver and the receiver identify gaps between company expectations and employee output. It should be specific, and while it’s good to focus on the positives, it won’t always be in the form of praise.

This article will share a functional, practical framework for giving constructive co-worker feedback so the business can make productive changes without making anyone feel uncomfortable or less-than.

The Four Quadrants of Feedback

Not all feedback is made equal. To differentiate the different kinds of feedback, one can think of two intersecting axes, creating four separate quadrants. The y-axis measures tone, from negative to positive, and the x-axis measures specificity, from vague to specific.

The best feedback, as mentioned above, should be very specific. Ideally, all feedback would also be positive in some way. So, yes, even if a coworker is going to give constructive criticism, it can still be positive.

When using the quadrants as a model, a coworker should try to stay within the upper-right hand corner. Here is where they’ll find what’s known as radical candor. This term describes feedback that is specific, clear, sincere, and kind.

When it’s time for someone to give their co-worker feedback, whether they’ve been given the task by upper management or asked directly by the co-workers, it’s essential to take time to evaluate their performance and come up with a framework for delivering the feedback, not just rattling off some criticisms immediately.

It’s all in the approach, and there’s a winning formula that co-workers can rely on every time, whether they are delivering overwhelmingly positive praise or harsh criticisms.

That formula combines context, observation, impact, and next steps (COIN).

This formula can make any kind of feedback more impactful but can especially help ease any tensions or nerves going into constructive co-worker criticism.

Before offering up any opinions, colleagues should first offer their co-worker context to the situation, offering up a reference point that they can think back to understand where the observation (in the next step) is coming from.

Rather than commenting on behavior in general, they should try to get specific, staying in that right-half of the grid. Of course, this may require giving multiple examples to drive a point that the behavior happens often. Still, it’s better than generalizing something that happens “all the time” without any further direction to those moments.

The next step of the framework is observation. The co-worker should try to remain objective, though it can be difficult when personal opinions try to sneak in. They should stay professional and keep the end goal in mind, not focusing on more personal things such as personality.

I noticed (when the incident happened) that you (what they did that was of issue).

There’s no need to expand on it further because this is where more subjective thoughts might try to work their way in.

Once the colleague has conveyed their main observation to the co-worker who asked for feedback, it’s time for them to share the impact of that behavior. They need to understand why this behavior is being commented on and why it matters. Next, they will need to explain how their behavior affects other individuals or the group at large.

While there may be many impacts of their behavior, the feedback giver should try to focus on whatever is the most relevant at that moment.

The fourth and final step that is critical to effective feedback is offering the next steps. Without it, the co-worker will have nowhere to go with the feedback just given to them, they will simply sit with it.

They may come up with their own next steps, which may not align with what the feedback-giver had in mind. So, it’s important to include this in the initial feedback offering.

In the case of constructive feedback, the following steps should propose some improvements the co-worker can try to incorporate going forward and some ideas of what they could do differently in the future.

Just as there’s a wrong way how to ask for feedback, there’s also a wrong way to give feedback. To ensure the receiver takes away as much as they can from the conversation, there are some things that any co-worker should avoid when giving feedback:

Like learning how to ask for feedback, giving feedback can be awkward and uncomfortable for coworkers. By following the proven framework described above and trying to remain as specific and objective as possible, the giver can provide impactful, productive feedback that will only help the receiver grow and help the company as a whole prosper.

As founder and CEO of RallyBright, John leveraged his experience in product development, team leadership, technology and marketing to help drive RallyBright’s rapid growth. RallyBright is a SaaS platform that helps business leaders and coaches build better teams. This is done by integrating behavioral science and data with proven professional development products that are built based on work with hundreds of teams and thousands of professionals.
View all posts by John Estafanous →
4 Forms of Organizational Forgetting
7 Principles of Management Education