Why a Quantum-Leap Strategy for Emerging Countries? 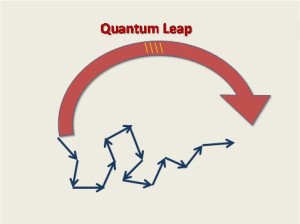 Gone are the days of incremental changes, whether on the micro or macro level, in sector reforms or a business plan of an SME project. In the globalization era, the business environment everywhere has turned into a process of perpetual dynamic transformations, this despite the onset of the financial crisis, with possibility that the latter symbolizes one of such brisk metamorphosis acts. This is the age of quantum leaps; this is the era of paradigm shifts.

Not longtime ago corporate strategic plans were produced for some 7 to 10 years, and one could easily foresee futures with confidence 5 to 10 years ahead. Currently a strategic plan is already out of date and possibly obsolete even before the report is completed, and one would be very lucky to predict events with some certainty 2 to 3  years ahead, and strategies need revising at least twice a year. Globalization is only the start of this constant transformation process, and the future holds many surprises. Pace of the transformation process is becoming critical.

Many developing and emerging countries have not yet grasped the consequences of this new paradigm. In many countries the same old practice of GRADUAL  modern reforms is still adopted, whether seeking to promote and support SMEs, or to promote investments and exports, or to boost higher education and research.  A quick transformation is deemed complex, difficult, unpredictable, and might be costly, and might carry too many risks in terms of non-compatibility. Gradual change is seen as more stable and easier to control and implement.

The common approach still practiced widely in developing and emerging countries when seeking some sector reform, including reforms related to SME support, is to visit different advanced countries West and East and examine at proximity the different models put in place, and which are already tried and PROVEN. The next step would be to choose one of the most suitable models, and which is usually more adaptable to the country seeking to initiate the reform. It takes then one to three years for the process of transfer of the know-how and establishment of the pilot project, and for the integration and consolidation.

In the meanwhile the advanced countries would have made a brisk leap somewhere else, with the consequence that the newly reformed sector in the developing country is still trailing behind, with ever widening gap, and with perpetual disadvantage in competitiveness. Author has encountered many reforms in developing countries embracing above described methodology with pride. This approach would have been tolerated in the previous century or millennium.  In the globalization era this stance can only guarantee return to square one.

Therefore, one has to ask where the advanced countries are moving to in the next few years, and to leapfrog to this future destination DIRECTLY through imagination and knowledge, and to adopt this future promising model and not the current proven model. Therefore the emerging country will travel directly to where the advanced countries are going and will meet them there, and not to where they are now. This implies a quantum leap on the part of the emerging country. If this transformation is done successfully there is at least a chance for the reformed sector to compete and succeed in the global market.

The type of advocated quantum leap: The quantum leap will not be performed for the sake of radical change as such, but should strive at receiving high impact positive outcome, in the form of a breakthrough. The type of quantum leap perceived is not in relation to the past situation in the country in question, i.e. resulting in a WOW effect usually, but in relation to the current situations in advanced countries, i.e. a real gigantic step. The quantum leap should not be limited to bridging gaps and pace of change, but can be very creative to deliver a whole new paradigm. In most cases quantum leap will be made in strategies and not goals, i.e. only the means to reach the goal will be radical in nature. In some instance even goals might undergo metamorphosis, but all with preservation of values. Values cannot change briskly unless a world of chaos is sought!

Scope of quantum leap sought: The quantum leap should not be limited to government programs of the emerging and developing countries but should encompass any action taken by companies in such countries, including SMEs, but also on the individual level. There is an accumulative effect in terms of building up competitive power, including synergy. As an example, why should an association or chamber of commerce and industry supporting SMEs in a developing or emerging country invest a lot of effort in creating a very distinct set of booster services? Would it make a tangible difference to the SME? If we look at different similar cases in the advanced world we recognize that such services account for a given percentage of the competitive advantage of the SME on the global scene, and not all of it. But at the end of the day, such partial advantages accumulate, in a synergetic form too, which impart the final decisive edge.

In other words, there is no need to go through the same path that advanced countries have taken in their development process, and to repeat their learning curve, but to overarch such a path, i.e. to quantum-leap.  This has become a possibility and a must for survival in the age of rapid transformations.

Economic feasibility of the quantum leap approach: As mentioned earlier, there will be many reservations expressed concerning this quantum leap paradigm by developing and emerging countries. It will be true that the initial cost for a leap will be higher than the traditional approach, and the process will be more complex, but if we look at the actual economic feasibility of the process even in the medium term of 2 – 4 years, we can prove that the quantum leap is much more feasible and more cost effective. It suffices to say that this method will bring beneficial results in terms of competitiveness on equal footing with advanced countries, e.g. in the form of growing exports, while the traditional approach will only lead to accumulative losses, with never ending dependence on the aids of advanced countries. Furthermore, the main problem will not be in terms of technology costs as much as provision of suitable skills and management of change.

There are other important justifications for the adoption of quantum leap by emerging countries.  Following the onset of the global financial crisis the advanced countries and in particular the Western world have lost much credibility in terms of economic paradigm. Credibility of the advanced countries has been also heavily tarnished on the environmental front, with the mother earth suffering irreparable damage and climate shift from ongoing major pollutions for decades particularly by the Western world.

The way balanced global solutions will emerge:  Overall the advanced world should make great strides towards learning from its mistakes and learning from others, and revising its values and contributions. Radical solutions are required this time and not mere “Fix-it” approaches as is being pursuit currently. A genuine convincing solution will revive the confidence in the economy, and hence will revive investments and business on a larger scale than before, but in the right way.

Learn more about the author’s thinking in formulating a breakthrough strategy in his 100+ slide deck available on Flevy here.

The new world order, and indeed the new economic order, cannot be dictated unilaterally by the advanced countries which have lost credibility and confidence in what they are doing, but should be based on a collective effort with clear contributions of all other nations in the change process, West and East, North and South. The genuine solution will not be born from traditional concepts, nor will it be based on the current financial or banking system, and it will not be born in a specific region. It will be most likely a collaborative global effort, and a synergy of different systems and cultures. An example along those lines is seen in the activities of the Economic World Forum.

The role of developing and emerging countries in the shaping of the new world: The developing and emerging world should not take the stance of “wait and see” what the advanced countries will come up with in terms of real solutions to the financial crisis, but should be more proactive and contribute actively to the shaping of the new era. Only through a joint international effort a more balanced world order can be created, with hope that the earth will be saved. Although the Western world and other advanced countries might be more advanced in the technical terms, all nations have something valuable in their resources, culture, religion, and creative power to share. Money alone as the main driver for growth cannot provide a balanced system anymore. A new set of multiple well balanced drivers to business growth have to be created.

Performing a quantum leap is no more an option for developing and emerging countries, but it is imperative in whatever is performed, on all levels, organizational and individual. The choice remains only between different quantum leap solutions.

How is a quantum leap realized in emerging countries?  In the first instance there should be a profound conviction that paradigm shift is the only option when initiating change. The gradual approach will lead only to the swamp. There is no more emulation of current states of advanced countries, but leaps to their strategic plans and even beyond. This is all now feasible in the global era and open sharing of information, with extra effort, extra research, ample creativity and indeed innovation, and resort to specialized expertise, translating into adequate studies and preparations to identify the most suitable quantum leap, and to implement it.

There is always the fear of the unknown in connection with quantum leaps, i.e. the element of adventure and risk, but this can be overcome with ample market intelligence and analysis, and use of expertise, enabling a much more confident prediction of the future, and better planning. With a clearer vision of the future and ample planning, risk is minimized, and the new journey can be undertaken with positive anticipation of the challenges.

A new project appraisal measure: To reinforce this new paradigm of universal quantum leaps, i.e. quantum leap in every task, a performance measure should be adopted targeting degree of quantum leap in every action and project, similar to measures of added value, or measures of quality, or innovation. It can be called “Measure of quantum leap” or “Kangaroo effect”. Any initiative that does not rate highly in this measure should be ignored. For instance, on a scale of 1 to 10, only projects scoring 7 and above will be considered.

Dr. Stephen M. Sweid, founder of Cinnosys, is a business and innovation consultant and trainer, with over 20 years consulting experience on the international scene: Europe, USA, Middle East, and Far East. He has involved as expert consultant in technical assistance projects of international organizations as well as in consulting projects commissioned by multinationals. He is also an author on Flevy, specializing in breakout strategy methodologies: view his documents here.
View all posts by Dr. Stephen Sweid →