Contributed by Dana Todd on April 26, 2015 in Strategy, Marketing, & Sales 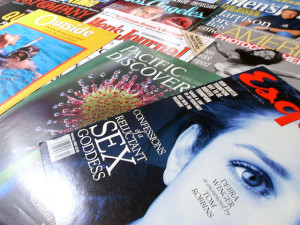 Standing in the grocery checkout, it’s tempting to pick up the magazines – even if it’s not a title you’d usually buy, just because a headline strikes you as interesting. I often like to peruse the men’s magazines and gossip magazines, but my gender, income and psychographics are not going to match up with expectations. The magazine publishers have struck a deal with that grocery store: does that mean I’m an unwanted viewer of ads in their magazine? For an advertiser, does this situation diminish the perceived value of the ads they bought?

In a recent Mediapost article, my distinguished colleague Ari Rosenberg posited that it’s bad practice for website publishers to buy traffic via Outbrain and other sponsored content vehicles. He had heard a story about a client who threatened to move his budget from essentially a blank check for premium run-of-site placement, and instead begin more limited audience segment buying against the inventory instead. Why? Because the client perception was that any premium publisher that bought traffic from Outbrain or native advertising service was essentially inflating its user base and diluting its “niche” or premium value.

At first blush, this sounds like a reasonable belief. After all, if you’re Revlon and you’re buying women’s magazine space – you don’t really want to buy the pageviews of curious teenage males who clicked on a headline about enhancing bra size. (Especially if you’re paying $12 CPM.)

But this isn’t magazines we’re talking about – it’s the internet. And advertisers shouldn’t still be buying run-of-site ads in 2015, unless it’s a ridiculously narrow niche site (and maybe still not even then). Advertisers buy magazines and TV shows as a proxy for exact targeting of a specific segment. Most of our current media buying practices still adhere to this foundation, and it’s certainly easier to just write a check and sign an IO than have to buy audiences one person at a time. Publishers aren’t making it easier either – a quick perusal of digital media kits will show you we haven’t truly embraced the opportunity of reaching customers outside of preconceived notions about who should (and shouldn’t) be reading a site or watching a video.

Furthermore, publishers shouldn’t push run-of-site either, because it diminishes performance usually. Both publishers and advertisers should embrace the sophisticated targeting capabilities that are available to them; realtime bidding doesn’t have to be a dirty word if it’s applied with the same precision as paid search. The difference is, most people aren’t putting as much thought or effort into personalizing display and content campaigns as they do their search ads. And publishers encourage blank-check buys because, well… blank checks.

Merchandising your content through a promotional vehicle is no different than having checkout-line placement, or pushing free subscriptions with airline miles. It’s mildly dilutive in terms of perfectly clean segments, but more likely to bring additional business. Drop the old ways of thinking about the value of media properties in terms of “real subscribers” as if they’re somehow a homogenous group of people with the exact same characteristics. If digital marketing has taught us anything, it’s that the consumer makeup is far less tidy than we ever believed and were taught by the old media planning ways. And – there are far more customers and influencers out there than we ever counted on before. Poor people buy luxury cars. Rich people shop at Target. We have all stepped out of our buckets on occasion.

I’ll grant you that Outbrain’s contextual matching is sometimes a little iffy, but over time one hopes we’ll see content targeted more at the individual (behavioral) rather than context or random/highest bidder. And both Outbrain and Taboola have pledged to clean up some of the crappier content in their units. Let’s not throw the entire business model baby out with the bathwater, though.

It’s all a matter of having better quality editorial content in the database, matched up via better technology to a highly receptive audience. The social operating system helps marketers more easily identify potential individuals; one of the reason Facebook’s revenues are growing so rapidly is that it’s taking what is essentially a massive, broad and undifferentiated global audience and allowing marketers to be extremely precise in their targeting around the psychographic and demographic makeup of the individual. And the units that get most engagement on Facebook are CONTENT – not traditional ads. LinkedIn has a similar approach in its sponsored content offering, albeit not as finely nuanced around interests.

If advertisers take the time to think through their content strategy and fund it with the same resources and creativity they do their advertising strategy, and if publishers step up their game to help connect properly with data and people segments properly, we’ll get a win/win. I think we’re just sort of in the ugly adolescent phase where we have a predominance of clickbait headlines and gossip sites participating.

Dana Todd is one of the few "Digital CMOs" with deep experience in Internet and tech, combined with broad marketing and executive skills. Dana has led global boards, passionate startups, and savvy consultancies, and she has solved challenges to help dozens of different businesses. Her experiences include leading global sales and marketing for a digital agency, founding a startup that helped monetize the online news industry, and building a leading digital agency with consumer and B2B brands. You can follow her on LinkedIn here.
View all posts by Dana Todd →